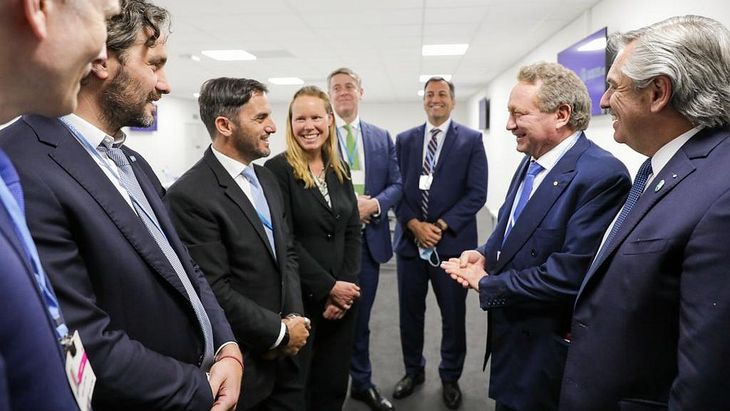 With foreign investment from Australia’s Fortescue Future Industries, the country aims to produce 2.2 million tonnes by 2030.

Argentina is trying not to be left behind in the face of the challenges posed by climate change. As part of the COP26 World Climate Summit in Glasgow, the government of Alberto Fernandez announced on Monday that Australian company Fortescue Future Industries will invest 8.4 billion dollars in Argentine Patagonia, the “largest investment in clean energy” in the South American country’s history. The project plans to turn the southern province of Rio Negro into a global export hub for the fuel, with production of 2.2 million tonnes per year by 2030.

“Green hydrogen is one of the fuels of the future and we are proud that Argentina is one of the countries at the forefront of the green transformation,” Fernandez said of the announcement. The project is expected to create 15,000 direct jobs and 40,000 indirect jobs.

Hydrogen is the most abundant chemical element in the universe, being the main material in stars, for example, and has the advantage that it only releases water when used as a fuel and not carbon dioxide like petrol. On Earth, however, it is not found on its own, but only in elements containing it, such as water, coal and natural gas, which require large amounts of energy to separate hydrogen molecules from each other in order to be used.

Green hydrogen is produced by using electricity from renewable energy sources to split water into hydrogen and oxygen. The Fortescue Future Industries project therefore foresees the construction of a wind farm that will power a plant to produce hydrogen from desalinated seawater and an export port near Punta Colorada in Rio Negro.

The governor of Río Negro, Arabela Carreras, highlighted on Tuesday that Fortescue chose the area for its climatic conditions, its strategic location – with strong winds and access to the Atlantic Ocean – and its human resources.

With this announcement, made two weeks before the parliamentary elections, Argentina joins the list of countries betting on this fuel, but is far from Chile, which leads the region and is already implementing two projects in the framework of the National Green Hydrogen Strategy presented in 2020. In Argentina, the Australian company will begin pre-feasibility technical studies next week, followed by public consultations. If the schedule is met, the pilot phase will start next year and the investment to produce 35,000 tonnes of green hydrogen is estimated at $1.2 billion.

At the Glasgow summit, several Latin American countries, including Argentina, called for international financing and debt-for-environment swaps. No Latin American country is among the ten most polluting in the world, but this most biologically diverse region is suffering the consequences of climate change like few others. “We have to design payment mechanisms for ecosystem services and introduce the concept of environmental debt,” Fernandez said at COP26.

This week, the Argentinean government has also published the basis for an energy transition until 2030. According to the official resolution, 90% of the increase in installed capacity between 2020 and 2030 must come from low-carbon energy sources. “This decarbonisation pathway would result in a reduction of the carbon intensity of electricity by almost 50% compared to the current status quo, which would reduce emissions from this sub-sector by almost half,” the document states.

“The world is moving in this direction and business barriers to environmental inaction will become more and more frequent. We are doing it out of conviction and convenience,” admitted production minister Matías Kulfas last July when he presented the green production plan to correspondents. Almost a decade ago, Argentina was convinced that the giant Vaca Muerta unconventional hydrocarbon formation would become one of the country’s economic engines. The hydrocarbon industry now receives millions of dollars in subsidies, but the government no longer sees it as a lifeline.

In addition to global pressure, there is growing citizen mobilisation in Argentina. “If we grow economically but destroy forests and wetlands, it will have serious consequences, and we are the first generation that will have to face the consequences of climate change head on,” says Gastón Tenembaum, one of the founders of Youth for Climate. “We have to understand the environment as part of the whole,” he says.

The biggest foreign investment of the century, the government announces it but does not enjoy it

The announcement of the investment during the climate change summit in Scotland is undoubtedly the most important positive news in recent years for Argentina, which has been hit by a pandemic – the same one that put the state’s finances in a critical state – aggravated by various mistakes by the government itself. The arrival of a million-dollar investment, unthinkable in this context, gives the government the certain peace of mind it needs, at least from a political point of view.

Specifically, the Australian company Fortescue has announced that it will invest 8.4 billion dollars in the production of green hydrogen in the province of Rio Negro, which will create more than 50,000 direct and indirect jobs and whose production will be destined, in the first phase, exclusively for export.

The announcement was made in Glasgow, Scotland, where the COP26 climate change summit was being held, by President Alberto Fernández, the head of Fortescue, Andrew Forrest, the company’s CEO, Julie Shuttleworth, and the company’s head for the Latin American region, former rugby player Agustín Pichot, as summarised by the special envoy of El Cronista and the news agencies present in Scotland.

The scale of the project will enable Rio Negro to become a world hub for green hydrogen exports by 2030, with a production capacity of 2.2 million tonnes per year, which would cover energy production equivalent to 10 per cent of Germany’s annual electricity consumption.

After the meeting, the President stated that “green hydrogen is one of the fuels of the future and Argentina is proud to be one of the countries at the forefront of the energy transition”.

The euphoria continued. “This is the most important investment announcement of the 21st century in Argentina, which we accept with great responsibility and pride,” said Matías Kulfas, Minister of Productive Development. “It is an investment that establishes a new sector, the green hydrogen industry, which is growing internationally,” he said.

Clearly, this is a brilliant announcement. Talk of a multi-billion dollar investment in the midst of a dollar shortage is hopeful sounding news. But there is also reality. In this country in need of “affection”, every caress is a good thing. The announced investment is not for tomorrow. Like all big spending, it has a time frame, which this government will surely not enjoy.

Officials will have to keep a close eye on this announcement to ensure that it does not turn out to be another million-dollar proposal that comes to nothing.

Agustín Pichot: “We want to start as soon as possible with an investment of u$s2,500 million”.

Agustín Pichot, President of Fortescue Latin America, has announced an investment of nearly $8.4 billion in green hydrogen production in Argentina. The news was announced on the sidelines of the COP26 climate change summit in Glasgow, Scotland.

In an interview with C5N’s Julián Guarino, the former Los Pumas player explained that “this is a very new industry and we know that we have to reduce the cost of production, but that is why we want to start as soon as possible with an investment of $2.5 billion”. He also added that the challenge is not only the magnitude of the investment, but “to manage it over the next 10 years”.

In the context of our country, Pichot analysed that there are “conditions imposed by the foreign exchange market, not to pay dividends, but to make the payment of the debt of this investment sustainable, which is logical for any business”, but also that he believes that “it is good to invest in the country and hopefully the necessary jobs can be created”. According to the press conference at which the announcement was made, the company plans to create more than 4,000 jobs in the region in the first phase.

Fortescue has already started exploration work around the Sierra Grande site in Rio Negro, which it plans to turn into a global green hydrogen export hub with a production capacity of 2.2 million tonnes per year by 2030. On the importance of decarbonisation, Pichot said that “it is a challenge that we all have to take on. Everyone can take individual steps, but it is the industry that has to change, and that is where big projects like this can help globally and get people and governments to demand change.