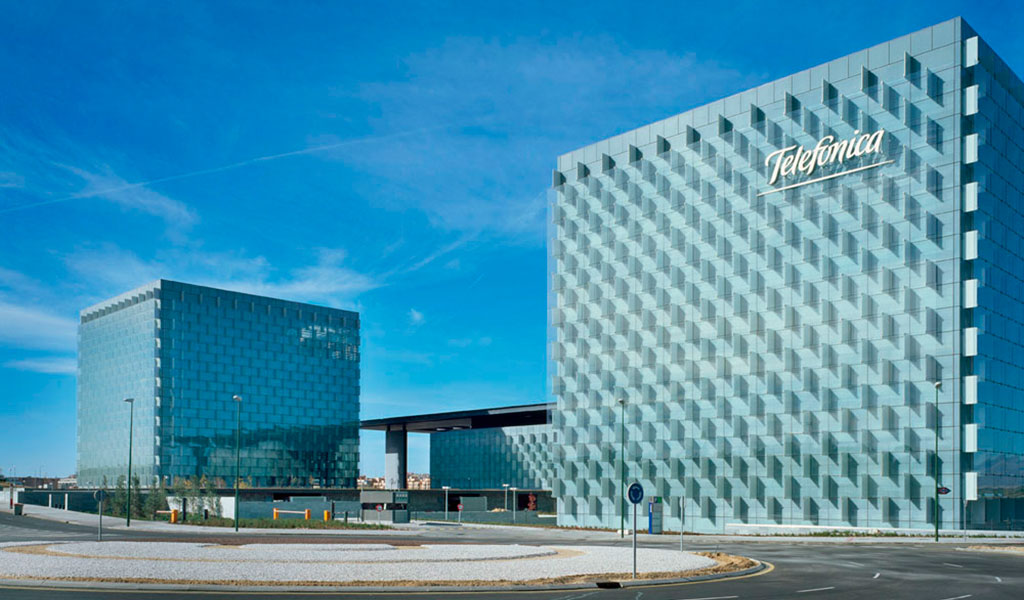 The Telefónica District is a new 140,000 square metre space conceived as a global technology centre where innovation, development and technological experimentation will take place. Its main objective is to attract and retain talent, as it is capable of training 100,000 people a year.

Telefónica is to open a large global innovation and talent centre of at least 140,000 square metres at its headquarters in Madrid. The new facility is called Distrito Telefónica and its main objective is to offer an innovative experience that will allow the company to strengthen its leadership in the new digital world.

In its inaugural phase, it will host some fifty cutting-edge technological innovations: holography-based experiences, gaming, robots, connected cars, drones, state-of-the-art security and the latest developments in hybrid classrooms. In a further effort to bring the future of today closer to the future, the buildings will form a vast interconnected network of excellence focusing on 5G, artificial intelligence, smart optics, edge computing, deep learning algorithms, IoT, cloud, cybersecurity, blockchain and video.

“The future is the present.

The new space will consolidate Telefónica’s position as the undisputed leader in digitalisation, a commitment to go beyond technology and focus on talent. In the words of the Chairman of Telefónica, José María Álvarez-Pallete, the Telefónica District will be “a leading centre for leading companies”.
The Chairman of the Board announced the launch of a large global centre for innovation and talent at Telefónica’s headquarters in Madrid, stressing that “the future is present and it is through innovation and talent, because that is where people’s lives are being changed”. Telefónica wants to redouble its commitment to the future and to people through the Global Innovation and Talent Centre”.

The new digital world demands continuous learning throughout the professional career with access to new skills and tools, so the updating and recycling of knowledge are also priority objectives for Telefónica and its Hub.

Espacio Telefónica will become a world reference centre for innovation and talent, capable of training 100,000 people a year. An extensive network with buildings equipped with the most modern connectivity to enable the exchange of technology and information. A pioneering centre that aims to attract and retain talent and offer them the best conditions to see and create the future.

At the global forefront

100 million euros will be invested in the Global Innovation and Talent Centre until 2024, a special year for Telefónica as it celebrates its first centenary. This project also extends the implementation of the strategic plan announced by the company in November 2019. The Group continues its transformation to create a new Telefónica, and this project will contribute to this with its strong commitment to innovation and talent.

“Innovation and talent are two key factors for the progress and prosperity of Spain, essential for reducing inequalities, creating jobs and placing our country at the forefront of a better, more sustainable, fairer and more inclusive world, where collaboration is the best competitive advantage,” said Álvarez-Pallete. With this centre, Telefónica confirms its commitment to the future of the country. Thanks to its characteristics and the mission with which it is conceived, the new centre will be at the global forefront in the attraction and development of technology and highly qualified professionals.

More about the telephone district

Distrito Telefónica is the headquarters of the Spanish telecommunications company Telefónica, S.A.[1] in Las Tablas, a neighbourhood in the Fuencarral-El Pardo district of Madrid, Spain, accessed from the A-1 “Autovía del Norte” motorway and the M-40 ring road. The complex was known as Distrito C or Distrito de las Comunicaciones until 2011.

The project was designed by Rafael de La-Hoz. It was built in 36 months on 370,000 square metres in Las Tablas, a growing area between Madrid and Alcobendas. This project was awarded several times[clarification needed], due to the layout of the Madrid metro station (Ronda de la Comunicación on line 10) and various communications.

The buildings have a surface area of 140,000 square metres and were at the time the largest glass project in Europe, even larger than Banco Santander’s Ciudad Financiera and Madrid-Barajas Airport projects. This district consists of twelve office buildings: four ten-storey buildings at each end and eight four-storey buildings in between. This complex also includes a shopping centre, which is open to the public, and several other buildings for additional services. The aim of Distrito Telefónica is to bring together all the company’s resources in one place, which guarantees significant savings in its management structure.

The investment amounted to more than 500 million euros and was financed mainly through the sale or lease of several properties owned by Telefónica in Madrid. The Telefónica District is home to 14,000 people, including employees and visitors to the Group.

Telefónica’s design of the complex will result in significant savings in air conditioning and heating (15% in winter and 34% in summer) and will reduce CO2 emissions by 5,000 tonnes per year. The choice of glass façades will save 42% in lighting costs.