Bitcoin plummets to $60,000 and ether falls amid broad cryptocurrency decline 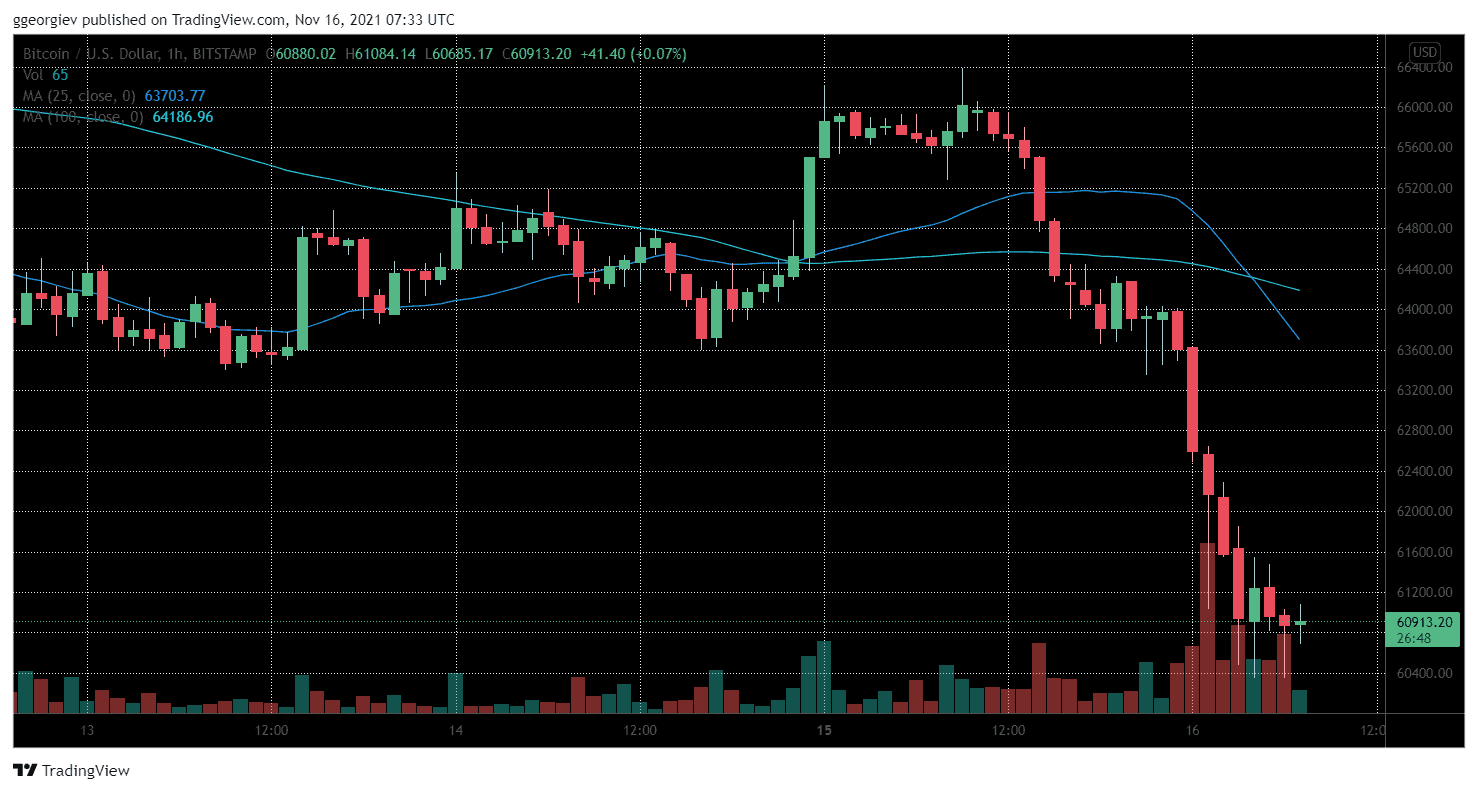 The cryptocurrencies fell on Tuesday, with Bitcoin approaching the $60,000 level and Ether touching one of its lowest levels this month.

Bitcoin, the biggest digital token, was falling 4 percent to about $61,400 at 1:32 p.m. in Singapore. Ether, which ranks second, fell as much as 6.8 percent. The global cryptocurrency market capitalisation has fallen about 7 per cent to $2.8 trillion in the past 24 hours, according to tracker CoinGecko.

“We saw the US Infrastructure Act being enacted, which started a sell-off by operators concerned about regulation and taxation,” said Hayden Hughes, CEO of Alpha Impact. A platform that allows investors to copy the strategies of other cryptocurrency traders.

He also addressed concerns about China’s continued regulatory measures. The country will consider imposing punitive energy prices on companies that mine cryptocurrencies, said Meng Wei, spokesperson for the National Development and Reform Commission, at a press conference.

The new tax reporting requirements for digital currencies are part of the $550 billion infrastructure bill just signed into law by President Joe Biden. China, for its part, has for many months introduced sweeping measures against the cryptocurrency industry, in part because of the energy consumption and potential environmental impact of bitcoin mining.

Bitcoin has more than doubled this year, while Ether has risen sixfold. Both currencies hit records last week amid enthusiasm for digital assets, driven by speculative demand and controversial claims that they can hedge inflation risks.

Some technical indicators suggested that the strong run in cryptocurrencies was due for a pause. In any case, digital tokens are notoriously volatile.

“It would be unusual for them to keep going up without corrections,” said Vijay Ayyar, head of Asia-Pacific at crypto-exchange Luno in Singapore. He argued that “we are seeing a healthy pullback” after a long rally.

Cryptocurrency markets are in the red this morning, as more than $200 billion worth of digital assets and derivatives have been liquidated in the past 24 hours.

The total market capitalisation of the cryptocurrency market has fallen by $216 billion since yesterday, as part of a decline that has brought it to just under $2.78 trillion, according to CoinGecko.

This massive liquidation is the second this month, following that of leveraged derivatives traders on 11 November, which led to a fall of $125 billion.

Total market capitalisation has fallen back to early November levels as major cryptoassets continue to correct from their recent all-time highs.

Bitcoin leads the way down

Bitcoin is driving the markets into the red during the Asian session on Tuesday morning. BTC has lost 7.3% in the last 24 hours and is down to around $61,000 at the time of writing.

The king of cryptocurrencies has retreated 11.6% from its all-time high of just over $69,000 on 10 November. Pricing models, such as stock-to-flow, continue to predict further gains for Bitcoin later this year, with a price target of $135K painted.

Despite this latest loss, the price of BTC has more than doubled since the beginning of the year, when it was trading at around $29,000. According to Tradingview, there is support at the 50-day moving average, which is around the $58,800 price zone.

The bitcoin decline comes just a day after Taproot’s privacy update launched without a hitch.

Altcoins bleed out as cryptocurrencies plummet

As usual, the rest of the cryptocurrency market is being dragged down by big brother. Ethereum is down 8% at the time of writing, falling to $4,329. ETH has now lost 11.2% from its all-time high of $4,878, also reached on 10 November.

The altcoin market is a sea of red at the moment, as no token in the top 50 has gained today. Binance Coin, Solana, Cardano, XRP and Polkadot have lost between 6% and 11% in the last 24 hours.

The biggest losses were suffered by other altcoins such as Litecoin (LTC), Chainlink (LINK) and Crypto.com (CRO), which fell by more than 12% on the day.